Summer time is for traveling, right? Well…depends. Some friends and I decided to attempt a trip to the capital of the United States. Perhaps, we were lured by the idea of a gigantic beach of plastic balls, or just because we were tourists who wanted to check out Washington DC. We had it all planned out and accounted for the weather which had been predicted to be over 95 degrees. And of course,  weather, being weather, decided to rain instead.

Our first task was to secure transportation, and we did so by using the WMATA metro/subway system. For those of us that have been to NYC, we noted that the DC metro at least had cushioned seats compared to the hard plastic seats of NY subway. There was also more green in the stations because more of the DC subway was outside. Either way, unlike NY, the subway fare is not a one flat fee per ride. The fare depends on the distance/stations traveled.

Our first stop was the National Building Museum, a museum focused on architecture, building, and engineering. But mainly, we were here because of an attraction called “The Beach”. Dun Dun Dun! 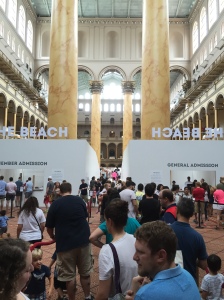 Entrance to “The Beach”

Of course, our next challenge was getting into line and waiting forever to get tickets. So…there was a line to get tickets, and then a separate line after getting tickets to get into the “Beach” attraction. Apparently, all the parents had brought their kids. The admission for the beach and the museum was $16 per adults and $13 per student. Alas, we had obtained groupons that said $8 for admission for 2 people to the museum, so we ended up paying another $8 each to get into the museum. Word of advice. Either get there early or late. The museum opened at 10am, and getting there at 10:40 resulted in a a lot of waiting. I think between the two lines, we finally got into the beach at around 12pm. 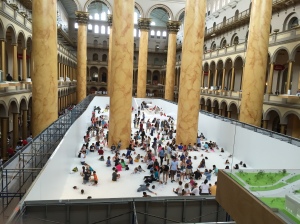 Beach View from Top/ Side with Sea of Balls

Upon entering “The Beach” area, we saw a mass of white. The walls and the floor were all white, and the plastic balls which made up the “sea” further away were clear. The “sandy white floor” area contained white umbrella and chairs and a concession stand, but the real attraction was the other half of the area, the “Sea of clear plastic balls”. Naturally, we walked to the far end of the attraction and jumped in to the deepest part. The sea is probably waist height, but it was a bit hard to stand anyway with all those disruptions from people jumping in happily around us. In fact, some of us started sinking deeper and deeper as more people jumped in (and sometimes peopled landed on top of us), and eventually we needed some help to get out of the “Sea”. As with all actual seas, there are sloped areas where the “sea” is shallower. We decided to take it safe after escaping the “drowning” and stick our feet there. That was a bit more manageable.  We finally left feeling accomplished and lol-ing at drowning in the sea.

Afterwards, we swept through the other museum exhibits in the National Building Museum. There actually isn’t a lot. There are building areas for kids, but there really wasn’t too much stuff that would warrant another visit. We enjoyed looking at some miniature houses and mock wind tunnel tested shape of rooves against winds.

And then we were off to a late lunch, stopping at a stall by the Verizon Center for savory crepes made by “Crepes by the Walk”. These crepes are pretty good. I tried them a couple years ago. But this day, there weren’t as good. We got the California Brunch crepe, which contained cheese, turkey, tomato, mushrooms, egg, avocado, and …I think that was it? The avocado was a little hard this time, and the crepe just didn’t taste as satisfying as it used to. Maybe they changed management? You can still see them make the crepes in front of you, but there were noticeably more flyers and signs covering the stall to obscure the view. Gelato from walking distance “Pitango Gelato” was pretty decent though, and great because the weather was heating up.

Green Car from…. one of the more recent Bond Movies

And then…spy museum! What do you know? A line out the door too on this one. I’d probably just recommend going on weekdays to visit attractions instead of weekends. It was crowded inside the museum too. Since the ticket prices are over $20 per persion, I would definitely recommend trying to find a coupon. This museum also isn’t worth multiple visits unless the special exhibits are very interesting to you. The “special” exhibit was for the Spy Museum was a focus on the villains in the James Bond movies. First, we were led to an identity room, where we had to choose an identity to pretend to be. Unfortunately, that was as far that went because that information was never used further in the exhibit. The rest of the exhibit featured information/history about espionage items and events some props from James Bond with film clips and items such as those cars in the pictures above. There were also “fact or fiction/real world or film world” trivia questions scattered about that were interesting to learn about. The most hands on experience was crawling through an air duct.

After some other random stuff, someone wanted decided to check out Ray’s Hell Burger, which is a restaurant in Arlington, Virginia. So, we went, and  I ordered the Soul Burger, and I have to say it is rather lacking compared to the other burger place I tried in DC called “Duke’s Grocery“. Duke’s burgers were more flavorful and prob more expensive too. Nevertheless, the tax rate in Arlington and DC are both 10% right now apparently, sooo..I’d prob suggest going to Duke’s. 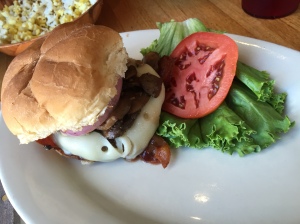